In this section...
Share This Page
Email this page

Click on any of these links to access a range of useful information.  This is intended to support you as a parent to source the best possible advice and guidance for your child.  If you do have a concern and would like to speak to a member of the team then please do not hesitate to contact us or make a referral.

Unfortunately modern society and the online world present a number of challenges when it comes to keeping our young people safe.  The following information is intended to help parents and carers raise their awareness about specific areas of safeguarding that affect young people in society.  Each section provides information about the issues and what to look out for if you have concerns.  If you would like to discuss a concern or have any questions please contact a member of the team or submit a request for help.

What is it?
Child sexual exploitation (CSE) is a form of child sexual abuse that occurs where an individual or group coerce, manipulate or deceive a child into sexual activity in exchange for something the victim needs or wants, and/or for the financial advantage or increased status of the perpetrator or facilitator.

What do I need to know?
CSE can involve violent, humiliating and degrading sexual assaults, but does not always involve physical contact and can happen online. For example, young people may be persuaded or forced to share sexually explicit images of themselves, have sexual conversations by text, or take part in sexual activities using a webcam.

Children or young people who are being sexually exploited may not understand that they are being abused. They often trust their abuser and may be tricked into believing they are in a loving, consensual relationship.

What are the potential indicators?
Indicators of sexual exploitation can include a child:

What is it?
Child Criminal exploitation is where an individual or group take advantage of a person under the age of 18 and draw them into criminal activity. Often referred to as ‘County Lines’.

What do I need to know?
County lines is a term used to describe gangs and organised criminal networks involved in exporting illegal drugs into one or more importing areas within the UK, using dedicated mobile phone lines or other form of “deal line”. They are likely to exploit children and vulnerable adults to move and store the drugs and money and they will often use coercion, intimidation, violence (including sexual violence) and weapons.

Drugs – County lines commonly involves the illegal distribution and dealing of seriously dangerous drugs from one city/town to another. The most common drugs involved are heroin and cocaine (crack and powder), but also MDMA, cannabis, amphetamines and spice.

Exploitation – Gangs recruit and use children and young people to move drugs and money for them. Children as young as 11 years old are recruited, often using social media. They are exploited and forced to carry drugs between locations, usually on trains or coaches. They are also forced to sell drugs to local users.

Sexual Exploitation – Young girls are often groomed and forced into relationships with gang members and are made to perform sexual acts.

What are the potential indicators?
A young person’s involvement in county lines activity often leaves signs. A person might exhibit some of these signs, either as a member or as an associate of a gang dealing drugs.

Terms often linked with county lines:
Cuckooing -Cuckooing is when drug gangs take over the home of a vulnerable person through violence and intimidation, using it as their base for selling/manufacturing drugs.

Going Country – This is the most popular term that describes County Lines activity. It can also mean the act of travelling to another city/town to deliver drugs or money.

Trap House – A building used as a base from where drugs are sold (or sometimes manufactured). These houses usually are occupied by someone (usually adult drug users) but sometimes young people are forced to stay in trap houses.

Trap Line – This refers to when someone owns a mobile phone specifically for the purpose of running and selling of drugs.

What is it?
Domestic abuse is any type of controlling, bullying, threatening or violent behaviour between people in a relationship. It can seriously harm young people and witnessing domestic abuse is child abuse.

What do I need to know?
The impact of domestic abuse involving children can come in many forms including physical, sexual, emotional, economic, isolation or threats. These impacts could be directly on the children or between adults in the house that is witnessed by the children. Domestic abuse can occur in the home, over the internet, over the phone and can often continue after a relationship has ended.

What are the potential indicators?

What is it?
“Mental health is defined as a state of wellbeing in which every individual realises his or her own potential, can cope with the normal stresses of life, can work productively and fruitfully, and is able to make a contribution to her or his own community”.  (World Health Organisation)

What do I need to know?
All young people will experience regular worries, this is perfectly normal and is not something to be concerned about.  If a student does express that they are worried about something then often the best remedy is a chat with a loved one or friend.  However, if any worries are more persistent and cause the student to be stressed or sad over a period of several days or reoccur regularly then it is possible that they may need some additional support to deal with the source of their anxiety.

Anxiety is an emotional state commonly caused by the perception of real or perceived danger that threatens the security of an individual.  If this becomes persistent and the student is experiencing severe anxiety symptoms with irrational fears that significantly impair normal function then they may have developed an anxiety disorder.

Some young people use self-harm as a mechanism to cope with distressing thoughts or feelings.  This can give temporary relief; however, the underlying caused is not addressed then this will lead to a build-up of grief and shame which may lead to further self-harm. If you come across a young person who has self-harmed do not react or look shocked, this could amplify any feeling of shame and make the experience worse.

What are the potential indicators?
A person may be experiencing anxiety if they are experiencing palpitations, pounding heart or rapid heart rate, sweating, trembling or shaking, feeling of shortness of breath or smothering sensations, feeling dizzy, light-headed or faint.

A person may be feeling depressed if they are feeling sad or have a low mood that is not improving, have a loss of interest or pleasure in activities once enjoyed show changes in appetite — weight loss or gain unrelated to dieting, have trouble sleeping or sleeping too much, have a loss of energy or increased fatigue.

What is it?
Peer on peer abuse is any form of physical, sexual, emotional and financial abuse and coercive control, exercised between children and within children’s relationships (both intimate and non-intimate)

What do I need to know?
Peer on peer abuse can take many forms including:

What are the potential indicators?
Signs that a child may be suffering from peer on per abuse can often overlap with indicators of other forms of abuse:

The Prevent Lead at Nunnery Wood is Mr J. Hawley. If you have any questions about our approach to The Prevent Agenda or what it is then he will be happy to discuss

What is the Prevent Strategy?

How does the Prevent Strategy Apply to Schools?

From July 2015 all schools (as well as other organisations) have a duty to safeguard children from radicalisation and extremism. This means we have a responsibility to protect children from extremist and violent views the same way we protect them from drugs or gang violence. Importantly, we can provide a safe place for students to discuss these issues so they better understand how to protect themselves.

What Does This Mean In Practice?

Many of the things we already do in school to help children become positive, happy members of society also contribute to the Prevent strategy.

We will also protect children from the risk of radicalisation, for example by using filters on the internet to make sure that they cannot access extremist and terrorist material or by vetting visitors who come into school to work with students.

What is it?
Self harm refers to people deliberately hurting their bodies. Common types of self harm among young people include cutting (e.g. cutting the skin on arms, wrists or thighs), burning the skin, picking at wounds or scars, self hitting, or deliberately overdosing on medication, drugs or other substances that cause harm.

What do I need to know?
Most self harm is in response to intense emotional pain or a sense of being overwhelmed by negative feelings, thoughts or memories. For some young people it may seem there is no other way of dealing with what is going on, or expressing what they are feeling. Self harm may offer temporary relief but it does not help a person to overcome a problem over time.

Some people are more likely to self harm than others, including those who have experienced emotional, physical or sexual abuse or have a mental health problem such as depression. It is usually a build up of negative, stressful life events rather than one event that triggers self harm in young people.

There is an overlap between self harm and thinking about suicide however not everyone who self harms is suicidal. Sometimes people do very risky things and accidentally die or seriously injure themselves as a result of their self harm.

How can I help a young person who self-harms?
The best way to help someone is to provide support and encourage them to ask for professional help. Be as open with the person as possible and try to make them feel safe to discuss their feelings. Remain calm while recognising they might feel ashamed of their actions and worry about your judgements. Do not try to make ultimatums or force the person to stop, this could make things worse. 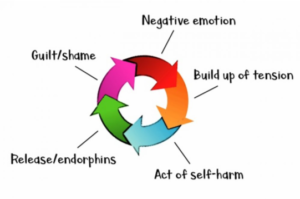 What is it?
The creation, sharing and possession of sexual images of people under the age of 18 by students.  Producing, receiving and distributing photos of this nature is illegal.  Nunnery Wood had clear procedures for dealing with sexting incidents which is informed by the UKCCIS guidance, more information can be found in our safeguarding policy.

What do I need to know?
Youth produced sexual imagery is defined as:

What are the potential indicators?